Five Reasons to Love the IRS 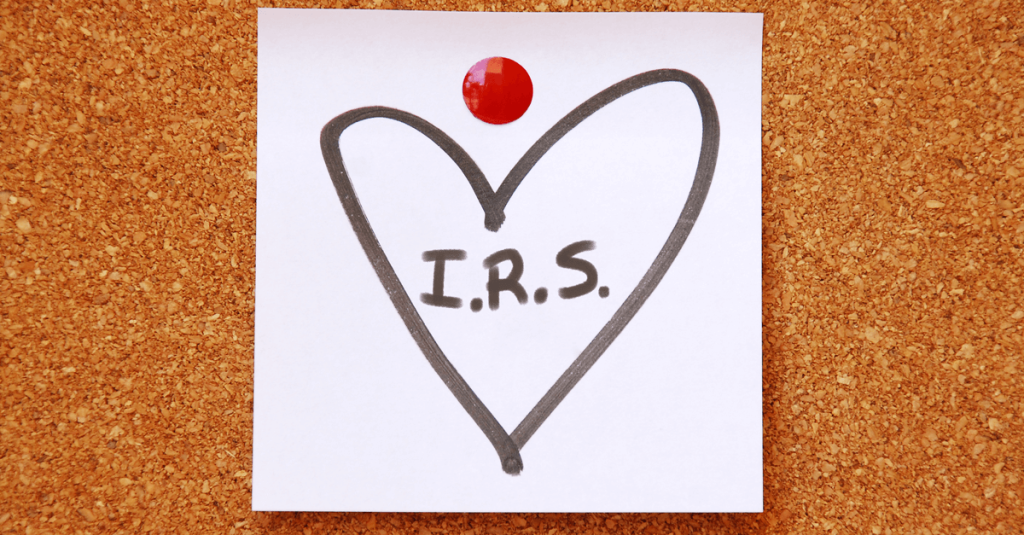 Let’s be honest. The words “Love” and “IRS” have probably never been used in the same sentence. We are more likely to cringe a little at the very word I-R-S (AKA Internal Revenue Service). There might even be some people that go into immediate cold sweats and their faces turn ghost-like.

We are here as the “IRS’s wingman” to tell you about all the great things they do, especially for pre-tax benefits. And, just maybe the next time you hear “IRS”, you give a half smile. (We can hope right?)

Believe it or not; the IRS actually wants individuals to use their Flexible Spending Account (FSA) dollars. Not once, but twice, the IRS has provided notices which expand the options to use remaining FSA funds.

The IRS stepped up again with the FSA Rollover through Notice 2013-71. With the FSA Rollover, participants can roll up to $500 into the new plan year. While this limits the dollars that can be rolled, it provides an unlimited (or nearly unlimited) time period in which to use remaining funds. Additionally, individuals enrolling in an HSA can have their funds roll into a Limited FSA. This allows them to open their HSA on the first day of the plan year.

Finally, the IRS shows us they care on an ongoing basis. In recent years, the IRS has sent notices in the fourth quarter reminding employees to use their FSA funds, along with the statutory limits for the upcoming year. Now, if that isn’t love, what is?

When HSAs were first introduced in 2004, the IRS was tasked with defining preventive care. When the Affordable Care Act (ACA) came out in 2010, slightly different interpretations of preventive care followed. Many were left wondering, “Can I keep my HSA and comply with the Affordable Care Act?” The IRS sauntered in with Notice 2013-57, confirming that covering preventive benefits required by the ACA would not jeopardize a plan’s status as HSA-compatible. The IRS saves the day!

Fast forward to 2018. Several states have passed laws requiring male sterilization to be covered prior to the deductible. Since male sterilization is not currently identified as preventive care, the plans in these states would be considered unqualified and individuals would not eligible for an HSA. The IRS once again swooped in like a knight in shining armor. It provided transitional relief until the end of 2019 to allow these plans to comply with State laws while also remaining HSA-eligible.

The IRS has a little heart. It recognizes that a ‘spouse’ is a ‘spouse’ regardless of gender. In Notice 2014-01, the IRS indicates that if an individual is a legally recognized spouse, they should be treated the same as any other spouse for the purposes of the use of an FSA and HSA. Previous to this notice, certain states and companies would often apply rules differently to employees. This guidance provided a more consistent and equitable treatment of all spouses.

Reason #4: Use of Debit Cards for Pre-tax Benefits

Using a debit card with an FSA is convenient. For many it has become a common necessity of having an FSA. But, that was not always the case.

In Notice 2006-69, the IRS clarified substantiation methods and requirements applying to all medical reimbursement plans. This set the benchmarks for debit card use with FSAs and HRAs. It also allowed debit card use to become mainstream.

We all know the occasional receipt requests today can be annoying. However, before IRS guidance, employees were required to submit 100% of receipts instead of the average 5-10% they may submit today. We have the IRS (at least in part) to thank for that.

This is a personal favorite. Health Savings Accounts (HSAs) were passed into law in December 2003. In a matter of weeks, the IRS was tasked with defining and clarifying how HSAs would work and what would be permitted. On January 12, 2004, they came through with Notice 2004-2. It was the foundation of Health Savings Accounts as we know them today.

Since then, they have come through with countless other pieces of guidance to advise and strengthen the use of HSAs. Today, over 20 million people with HSAs can be traced back to the hard work of the IRS.

So, we have come to the end. Do you think the IRS is worthy of a little love? Can we at least get a half smile? ?